The stock market has proven to be a great way for normal folks to build wealth over time. If get-rich-quick schemes work, it’s usually for the party on the other side of the bet. But investing in great companies at reasonable prices can be a great way to get rich over time.

It can be as simple as investing through index funds for some that don’t have the time or inclination to stay involved. But identifying good values and great companies can help boost returns even further. Below are five stock investments that could offer a diversified way to beat the S&P 500 index over the coming years and decades.

Some people want others to manage their money, and investing in Warren Buffett’s Berkshire Hathaway (BRK.A -0.35%) (BRK.B -0.65%) is almost like having a fund manager. But it comes with added benefits. Berkshire has brilliant leadership with Buffett and vice chairman Charlie Munger, who have been mentoring their eventual successors for years. It also offers a mix of stock ownership and cash generating operating businesses.

It owns businesses in manufacturing and retail, an energy and utilities business, BNSF railroad, and insurance. It also holds meaningful investments in a broad mix of companies that include several banks, Apple, Coca-Cola, American Express, as well as automakers. Buffett and Munger have liked buying Berkshire stock, too. The company spent more than $51 billion to repurchase about 9% of its own shares in 2020 and 2021. Its businesses continue to thrive, with operating earnings growing more than 19% year over year in the first six months of 2022. Those share repurchases have continued in 2022, though at a slower pace. Through the first half of the year, Berkshire spent $4.2 billion more on buybacks.

Walt Disney (DIS -1.47%) and Target (TGT -2.87%) have had struggles recently, but these names have proven they can navigate their businesses successfully through many different environments. Disney is pouring money into its streaming services as it builds that business segment. While its streaming business isn’t yet profitable, the company can fund that growth from its other segments. In its fiscal 2022 third-quarter report for the period ended July 2, 2022, Disney said its theme parks are thriving. For the nine-month period ending that date, its parks, experiences and products segment almost doubled revenue year over year. Importantly, revenue from the parks segment was also 9% higher compared to the same nine-month period prior to the pandemic in 2019.

Target stock has taken a recent hit after it created an inventory glut trying to work through supply chain constraints. But the company directly addressed the situation with investors and showed confidence in its plan by raising its dividend by 20% at the same time. Target’s dividend is one reason an investment is worth considering despite the risks. Having now raised the dividend for 51 consecutive years, the company is on the elite list of Dividend Kings.

While past performance isn’t a prediction of future results, Berkshire, Disney, and Target have treated shareholders well for a very long time. All three stocks have handily beaten the S&P 500 in total returns, including dividends, since 2000. 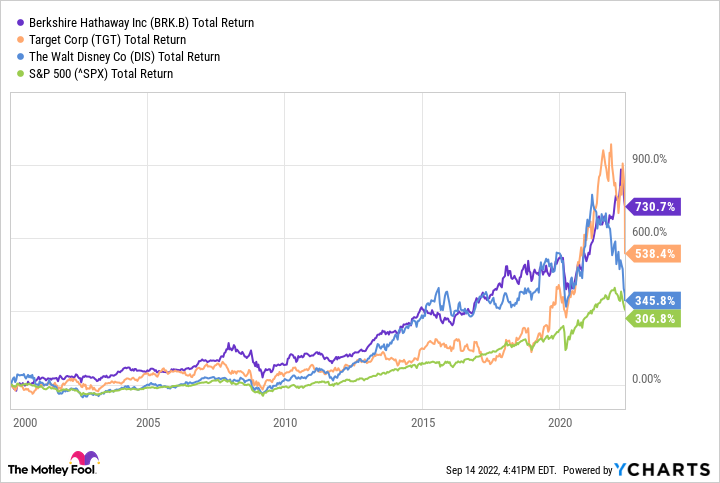 The electric vehicle (EV) sector looks to be just getting started, and it would make sense to have a stake in it. Tesla (TSLA -0.11%) has been the trailblazer and is the obvious leader. The company isn’t just sitting around waiting for others to catch up, either. CEO Elon Musk has the lofty goal of selling 20 million EVs annually. The company is just now ramping up its third and fourth manufacturing plants, and Musk’s goal is to have as many as 12.

Tesla is expanding its product offerings with its Semi Truck and Cybertruck scheduled to begin sales this year and next, respectively. It also has a growing energy business that supplies Megapacks for energy storage as well as products for solar generation. Tesla almost ran out of money when its was ramping up its mass production Model 3 vehicle. But it reported $5.5 billion in net income in 2021 and exceeded that in just the first six months of 2022.

Some investors might want to speculate on another EV name since the sector itself is just taking off. Like Tesla, China-based Nio (NIO -2.34%) narrowly avoided bankruptcy just a couple years ago. While it still is losing money, it had about $8 billion in cash on its balance sheet as of June 30, 2022. Nio has been struggling with supply chain issues as well as a drop in demand as China has continued to lock down cities as COVID-19 cases arise.

But those short-term struggles aren’t a reason to avoid the stock as part of a diversified portfolio. It continues to launch new vehicles and has started expanding its exports into Europe.

While Nio remains a very high-risk investment, the risk is tempered as part of this group of five stocks. One bad outcome can be overcome by the balance of these names. And the stock market has proven that if one diversifies appropriately, it’s the way investors can get rich over time.